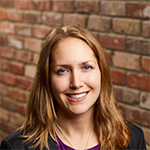 Anna (Tyszkiewicz) Gremling earned both her B.A. and Master’s degrees in Public Administration at Grand Valley State University, where she serves on the Alumni Board of Directors. Anna moved to Indianapolis in 2005, joined the Indianapolis MPO in 2008 and was named Executive Director in 2012. Personally and professionally, much of her time is spent engaged in transportation planning initiatives to enhance mobility in Central Indiana, including the Indy Connect public education process.

Her main responsibilities with the Indianapolis MPO include: