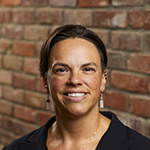 Rose Scovel grew up in Livonia, Michigan, a large suburb between Detroit and Ann Arbor. The view from a window seat on an airplane sparked her interest in planning, which was reinforced during her first year at Ball State University’s College of Architecture and Planning when she took a Plan 100 course taught by Jim Segedy, FAICP who would become her professional mentor. Here’s some Q&A so you can get to know her better.

I am an endurance runner and triathlete (swim, bike, run). In 2018, I met a three-year goal of finishing my first Ironman triathlon in Louisville, Kentucky. I have finished nine marathons and 76 half marathons, as well as six half-Ironman-distance triathlons.

Probably Des Linden (Desire Devila), the U.S. marathoner. She has put in consistent hard work over the long haul for her success, including winning the 2018 Boston Marathon. She’s also unassuming and not a princess.

I love Colorado and northern Michigan, being outside.

There’s a lot of feeling in the community that “everyone can plan,” but the special skills of combining quantitative and qualitative data, history and research, and the ability to envision what is possible within legal and fiscal constraints—while building consensus among interests—isn’t as easy as people think.

Equity is starting to get the attention that it needs in all aspects of planning – housing, land use, transportation, economic development, etc. There is a real need to be inclusive in development. Traditionally under-served populations have found their voice and become better at engaging.

I value communities for their unique qualities and characteristics and don’t really think there is a single definition of “best.” There are qualities of great places that are expressed in different ways, including places where people want to be, walkability and/or ability to get around without a car, the ability to bike safely, localized retail and restaurant experiences … and then my personal bias for water (lake, river, ocean).

If you could improve one aspect of Central Indiana infrastructure, what would you do?

Improve pedestrian and bike connectivity for transportation and recreation. Part of it relates to transportation choices being available so people aren’t limited by what is currently available. Part of it is the recreation/fitness ability to tackle some of our health and chronic disease-related challenges.

Encourage appropriate density and supporting infrastructure from the first development in several of the areas outside the historic city core.