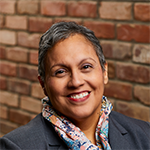 Anita was born and raised in Midland, MI. She moved to Indiana in the early 1990’s where she became an Office Manager in the Heavy Construction Equipment. Later she was a Rental Equipment Manager. She joined the IMPO in June of 2007.

Her main responsibilities with the Indianapolis MPO include: