Growing up in the Broad Ripple and Glendale areas of 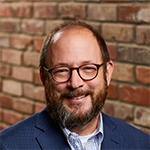 Indianapolis, Steve Cunningham and his siblings had what he considers a “pretty typical Midwestern small city childhood,” playing outside and riding bikes when they weren’t delivering newspapers or cutting grass. Always interested in big cities like New York and Chicago—and their transportation systems—he found summer work as a draftsman, drawing plat maps for development projects. He knew he’d found his calling when he discovered urban studies as a sophomore at Ball State University. Here’s some Q&A so you can get to know him better.

I read a lot, fiction and non-fiction, especially history and biographies of music and politics. My favorite fiction author is Patrick Taylor (Irish country series) and Erik Larson non-fiction.

My Great Uncle Kenny, a big man both physically and personality-wise. He was an electrical engineer with Standard Oil and rode the train to work in downtown Chicago which I thought was the coolest thing. He could fix anything, was always tinkering with something new and he smoked a pipe, and that is a smell I still love today.

Spooner Lake in northern Wisconsin where my family vacationed for over 50 years. The small 1930s cabins and the 1,000 acres of pristine cool water dotted with islands always gets my soul whole.More recently, the shores of Lake Michigan on Chicago’s north side do the trick.

That it’s part of representative government. I also think it’s important to understand planning’s dark past with regard to racial and social injustices and how that continues in some less obvious ways.

The shifts in planning resulting from autonomous vehicles, rideshare services, scooters, etc. because it is changing the way many people travel, yet may not be the panacea that many believe it to be.

I would not have abandoned the streetcar lines, but instead would have built upon them as the area grew.